The Kinglos wooden guitar chooses high-quality wood suitable for musical instruments. After more than two years of natural air drying, the wooden guitar is dried at a high temperature of 85-95 degrees for more than 30 days to ensure the stability and durability of the guitar after molding.

1. The choice of beautiful and precious Indian rosewood with hard wood grain as the guitar fingerboard and stringer ensures the gentle, smooth and full bass and midrange of the wooden guitar. Deep, beautiful, rich resonant sound and powerful midrange mahogany wood

2. Our company draw the sound beam structure advantage from the world-famous Martin guitar, and analyzes and tests the sound beam mechanical structure of the acoustic guitar with Korean guitar experts. It ensures that the surface of the wooden guitar is flat and beautiful, the guitar is durable, and the sound conforms to the prerequisites of modern guitarists' preferences and popularity. The next has a unique style and charm.

3. After hundreds of experiments and researches, the best arc of the back plate is obtained, which ensures that the front plate pronunciation is fuller and stronger and quick response.

4. As many as 16 times of paint coating construction process is a guarantee of quality. All high-quality drying paints from Korea are used. After spraying, they are heated by 48-55 degrees microcomputer infrared waves to allow the paint to dry from the inside to the outside to ensure the hardness and scratch resistance of the paint.

5. Kinglos adopts the binding and leveling method of Martin guitar fret lines to ensure that the wooden guitar will not be warped during use. The unique end-of-line processing technology allows the fret line to never be scratched.

7. Kinglos adopts the world's most advanced computer numerical control tone cutting equipment, the precision is up to three digits after the decimal point, and the pitch is required to meet the requirements of professional masters.

8. Kinglos adopts Japanese advanced technology to improve and strengthen (non-traditional technology), and the neck will break in other places when subjected to super strong external force, and it will not break here, so that users can avoid all worries. 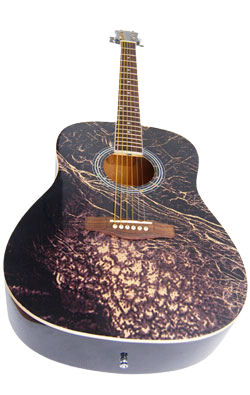 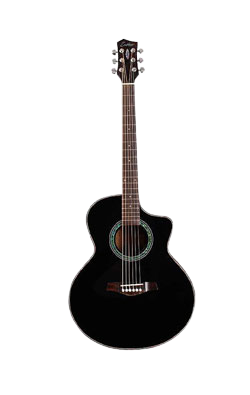 What is the wooden guitar range？

The main categories of wooden guitars

In the various styles, they are mainly divided into three categories: folk guitars, electric guitars and classical guitars.

Folk guitars use steel strings with a narrow neck. There are a total of 14 frets from the pillow to the body (while the classical guitar has only 12 frets), and there will be a guard on the box. Folk guitars can not only play solo, but are also suitable for playing and singing. It is the most popular type of guitar.

Electric guitars are usually solid. It relies on the strings to cut the magnetic lines of the pickup to generate different sound signals, which are then sounded through special speakers. The series effect speaker of the electric guitar can play hundreds or even thousands of tones, so it is more suitable for playing light music or rock music, and the live effects are extraordinary.

What is the best wood for making a wooden guitar？

Under the same conditions, spruce is more susceptible to humidity and temperature. If it swells due to moisture, it needs careful maintenance.

The spruce piano sound is warmer and brighter, with balanced high and low bass resonance and regular sound, suitable for playing classical or baroque music.

Generally, spruce is used in the panel of folk guitar.

Sequoia, also called red cedar. The sound is more delicate and simple, often used in classical guitars, and the tone is more feminine. The opening period is shorter than that of spruce, but the space for opening is relatively small. In addition, its hardness is not as good as that of spruce.

In terms of playing style, the redwood piano sound is more primitive, the treble is warm and sweet, and the sound is brighter, suitable for playing romantic and Spanish music;

The timbre of mahogany is warmer and the treble is translucent, but the bass dynamics are not too big. If you use rosewood, it can make up for the shortcomings.

Rosewood can produce a lower sound, with a fuller sound and good resonance. When paired with red pine, it can broaden the sound dynamics (including treble and bass) of red pine; when paired with spruce, it can make it have a thinner bass. The expansion also polishes the treble of the spruce; therefore, rosewood is a perfect match for red pine and spruce. It is often used as the back and side board, with red pine or spruce.

Pure rosewood is used for the front and back side panels. The volume is louder and the bass is very good, but the treble is slightly thin, so it is rare that all guitars are made of rosewood.

Acacia is denser and harder, which can prevent damp deformation. The general acacia guitars are more single and have a sweeter tone, but not sharp, the high frequency is very clear, the middle frequency is strong, and the sound intervenes in rosewood. And maple.

Similar to rosewood, the mid-range is better, and the bass dynamics are also better, but the catch is that the high-frequency range is slightly worse. If you use this cleverly during production, you can also make a very good guitar.

Pineapple is also called "coco pineapple". Its colors are purple, yellow, orange and red. The wood is harder, the texture is more beautiful, and it looks luxurious, with clear mid-range and moderate high-frequency, and the bass dynamics are slightly insufficient.

The wood is hard and heavier, and the sound conductivity is more impactful. It is more suitable for the neck or body of the electric guitar. There are many kinds of maple, such as birds eye maple, flame maple and so on.

Kinglos News & Blog
01
What is a Modern Electric Violin? 02
The Development Direction of Electric Violin 03
How Much Does a Violin Usually Cost? is There Any Difference?